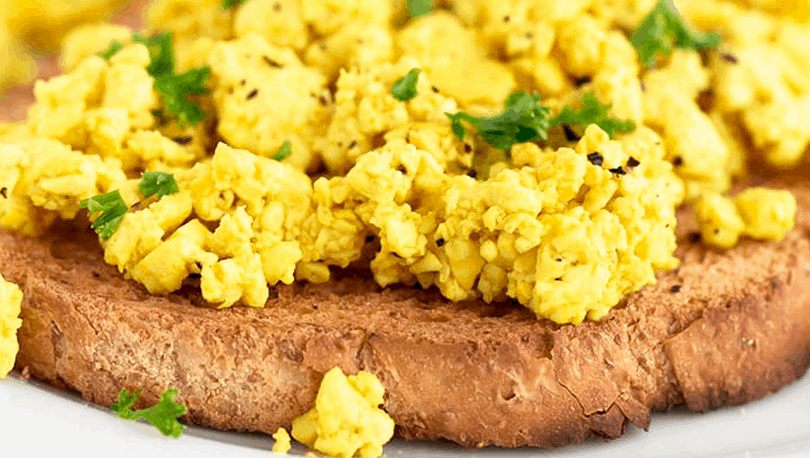 Vegan eggs are different from real eggs. Real eggs, just like many animal-based foods, are subject to controversy, with people having varied opinions when it comes to their health. Are they a healthy way to get your day started, or are they putting you at risk of developing a heart attack? Between the egg yolk and egg white, which one should you eat? Or should you eat both, or neither?

Well, in recent times, nutritionists have come up with vegan eggs as substitutes to the animal-based egg. However, not many people are familiar with these treats. In fact, people looking to make the change from an omnivorous diet to a plant-based diet have questions about its taste and protein content. As a result, this has made changing to a plant-based diet is harder. Luckily, we have compiled a comprehensive article that highlights the nutritional facts, taste, and how to make a vegan egg. But first, what are vegan eggs.

So What is a Vegan Egg?

Vegans have been consuming substitutes to popular animal-based foods for a long time. However, these alternatives are made from plant-based ingredients, as discussed below. A vegan egg is a plant-based egg that is made from plant ingredients to have a similar texture, flavour and taste just like the ‘normal egg’. However, the question on many people’s minds is; ‘Are vegan eggs healthy and tasty when compared to normal eggs?’.

Vegan eggs have gained popularity all over the world. The biggest brand VeganEgg started in the US and established itself in Britain in 2017. The eggs are algae-based which may sound weird, but you’d be surprised protein supplements contain algae as well.

Usually, many vegan eggs have algal flour as the main ingredient. The algae flour is comprised of fat, protein, ash, fibre and sucrose made from algae. Microalgae called chlorella protothecoides is harvested and stored for fermentation. You inactivate the cells by pasteurization then separate the culture from the broth. Wash the culture and adjust the PH by add-in potassium hydroxide or sodium hydroxide. Afterwards, add food-grade antioxidants like tocopherols. The final product is dried and packaged.

The protein in algal flour is exceptionally nutritious. It has a high content of highly digestible amino acids. However, the algae must be sufficiently processed to avoid possible illness.

The algae-based flour is an excellent source of B-12 for vegetarians and vegans who need to monitor their vitamin intake. It also has nutritional yeast which serves as another source of B-12.

A plant-based diet is highly encouraged and eating a vegan egg will have you on the right track. They are a healthy substitute that will provide the nutritional value you will get from a real egg. They pack the same number of calories and proteins as found in a real egg. 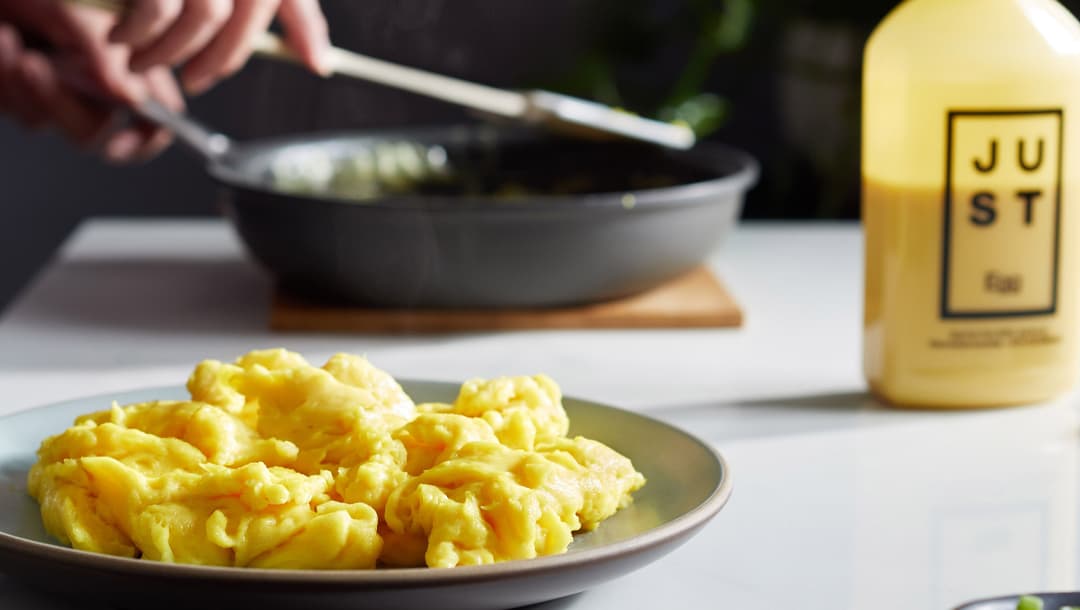 What is a Vegan Substitute for Eggs

Leaving out eggs in a recipe can lead to a disaster when baking. You must find an adequate egg substitute. There are many options available to act as a substitute for the real egg. Here are three available vegan eggs brands:

This is a finely ground flaxseed which can be used as a binder. It is recommended for whole-grain baking such as pancakes.

This is made purely from potato and tapioca starch. Egg Replacer does not contain gluten, eggs, casein, dairy, soy, tree nuts, peanuts, nor wheat. Mix it with water and attain a consistency favourable for baking cookies, cakes and muffins

The taste of this brand is relatively null. However, it serves its purpose when baking brownies, bread and cakes.

It is an excellent substitute due to its moisture content. It adds natural sweetness to baking cakes, muffins, pancakes and cookies.

There are varied options when it comes to substituting real eggs apart from the ones mentioned above. You can opt for avocado, applesauce or even chia seeds after soaking.

How Do Vegan Eggs Taste?

A vegan egg tastes just like a normal eggs. In fact you, can barely tell the difference. However, there are different brands in the market which will have different flavours and possibly taste. The taste determines whether one will be a vegan or a vegetarian. You can easily obtain your carton of plant-based eggs from a store. The retailing price for VeganEgg is about seven dollars for a pack containing ten eggs. However, there are many brands in the market and you should look for one that suits your nutritional requirements.

Take your vegan egg and pour it into a bowl. Add  a cup of water to the mixture. Whisk until it attains regular consistency. You might require a little more effort than a real egg when whisking. The batter will smell like a real egg after constant whisking. Four tablespoons of the vegan egg can easily make two eggs.

Pour oil onto your pan or skillet. You can use coconut oil which adds a great flavor to the eggs after pouring scramble the eggs until they become firm. The vegan egg will take three minutes more to cook compared to the real egg. It is crucial that you let it sit in the pan for a more extended period.

The final product is not as yellow as a real egg but has the same consistencies. It has a similar taste to a real egg and does not develop fluff after serving. Accompany this with strawberries, coconut milk and bananas for a complete breakfast.

First of all, you can store them just like the ‘regular’ egg; in the pantry and refrigerator. That said, a vegan egg, just like most plant-based products, are usually high in fibre and calcium.

Compared to animal (chicken) eggs, the vegan egg has fewer calories. Most importantly, fat calories are way less on a vegan egg than they are on a regular egg. Additionally, the fat content is higher in a chicken egg than in a vegan egg.

What the vegan eggs lacks for in protein, it makes up in high fibre, high calcium and is low in fat content. Plus, the Food and Drug Administration has ruled out any potential health hazards that a vegan egg might pose. As a result, vegan eggs are entirely healthy and approved by the FDA. It all boils down on what nutritional values you prefer. 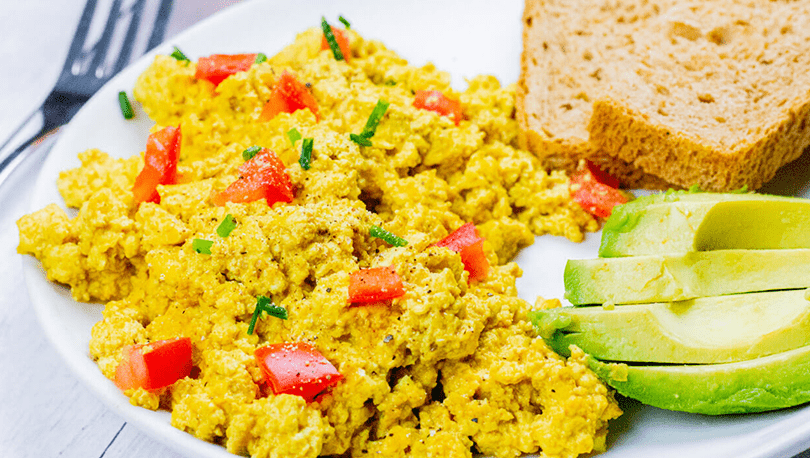 How to Make a Vegan Egg

A vegan egg can be as tasty and fun to make, as mentioned above. Usually, guides on how you can best make this vegan egg. You can cook your vegan eggs like you would a ‘regular egg’. But it usually takes a bit longer than it would with an animal egg. However, there are many types of vegan eggs, so be sure to check that out before settling for a specific recipe.

However, this recipe for making a tasty vegan egg is definitely going to impress your friends and colleagues. In fact, you might even influence them to make the change to a plant-based diet.

Start by whisking the yolk in a blender, while combining the kabocha squash, oil, water, black salt and kabocha salt. Afterwards, add some more water and cornstarch to the mixture and boil for a few minutes until the yolk is thick. Remember to keep whisking.

Let it cool for about 30 minutes as you mix the tofu, rice flour, salt, coconut milk, water and kosher salt in a blender. After it has achieved a smooth consistency, transfer it to a separate measuring cup and set aside.

Later, heat the oil in a small skillet and pour the egg white. After the egg has achieved an ‘egg-like’ shape, add the york on the white and cover your skillet. Remember to keep the heat low to avoid overcooking.

Cook until you achieve the golden brown look on the edges of the egg white. This should take you about three to four minutes. Also, remember to properly oil your skillet to avoid the egg from sticking. After it is cooked, lightly season the vegan eggs and vualá! The eggs are ready to eat.

So, will you give vegan eggs a try? They have a great taste, and their aroma is not repulsive as expected. The vegan eggs have almost the same nutritional fact as real eggs. Scrambled vegan eggs accompanied by additional protein sources such as almond milk will make your breakfast complete. You can also use vegan eggs for baking and many other cooking expeditions